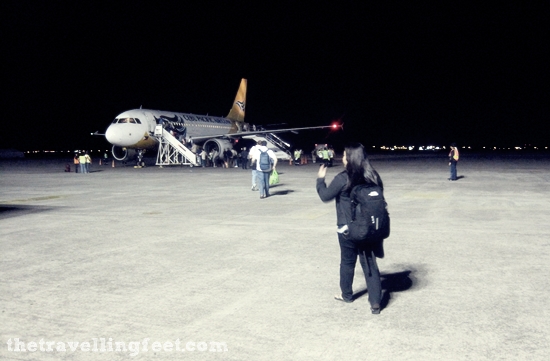 The best part about having a brother who is based in Manila is that I can ask favors like picking us up at the Ninoy Aquino International Airport Terminal 3 when our plane landed from Cebu while on our way to Bangkok 😆 Since we were crazy about cheap plane fares, we had to endure the consequence. On this particular trip, we had to follow this route: Cebu-Manila-Clark-Bangkok-Aranyaprathet-Poipet-Siem Reap just to reach our 1st destination on this leg of our Thailand-Cambodia trip.

After meeting up with my brother, he dropped us off at the Victory Liner Pasay Terminal. It wasn’t far from the aiport though. I just want to “inconvenience” him so that we can save on our expenses for this trip (at least I get to bond with him. LOL).

paid P137.00 for an airconditioned bus to going DAU, Pampanga

To reach Clark Airport, which is in Angeles City in the province of Pampanga, you have to ride a bus for a minimum of 1.5 hrs depending on the traffic.

If you still got a lot of time before your flight, you can chill at SM City Clark like that little fellow below 😉

Hiring an airconditioned jeepney will cost you P200.00 for the trip (one way) which is why it is convenient to travel in groups so that you can split the cost of the fare. We paid P150 for this trip since we opted not to have the air-conditioning unit of the jeepney on.

The Clark International Airport opens at around 5 – 5:30pm. If you arrive here early, you can find a seat at those tent-covered benches at the departure area or wait at the benches on the arrival area.

Even if you get inside the airport premises early, you still have to wait for the counters to open at 6:00pm. This is the best time for you to have your money changed to dollars or baht (Thai currency) in case you failed to do so. However, there’d be instances when the Foreign Exchange Currency booths inside the Clark Airport would ran out of bahts. If this happens, you can have your money changed to dollars and have your dollars changed to baht when you arrive in Bangkok.

surfing the net while waiting for our flight (photo credit: Soloflighted)

After missing our flight in Cebu, we had to make sure we were early for our Clark to Bangkok flight since we couldn’t afford to miss it again. One good thing about being early is you’d get to head first to the working power outlets inside the final waiting area of the airport and plug your gadgets while you kill time waiting for your flight.

Finally! After waiting for almost 2 hours, we got our queue to board the plane. The best thing with flying from Clark is that if the aircraft is on time and all the passengers have checked in, you get to leave early. I wouldn’t really say that we got the cheapest fare on this trip but it was already cheap compared to its normal rates. I even discovered that one of my closest friend found a cheap flight to Miami and was exiting from Clark Airport too. I saw her on our way to the boarding  gates as she awaited for her connecting flight out of Clark.

in the absence of a Headware, a malong can be useful in long flights

The travel time from the Philippines to Thailand is 3 hours. I only slept for 1 hour from the previous night so I couldn’t wait to shut my eyes on this trip. After an hour or so, I woke up and saw the Thai Immigration Card which needed my attention. You have to fill in those blank spots in the immigration card since you will need to hand them over at the immigration counters of any country you are travelling.

When you travel to a different country, whether you have a place to stay or not, be sure to keep an address of a place you intend to stay or just any regular address since that information is needed in the immigration card.

Alas! After 3 hours, I could already see the well-lit highways of Thailand.

Before you get out of the plane, be sure to move your clock one hour late since the Philippines’ time is one hour ahead of Thailand.

62 Photos that Make Narvacan, Ilocos Sur A Unique Adventure Hub in the Philippines