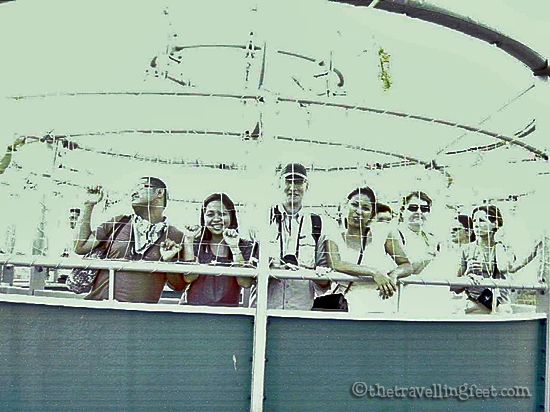 Last year, I vowed to myself that I should stop travelling to international destinations in the next coming months as I need to save up considering the fact that I just “retired” from my 5-year job in a BPO company. But when opportunity presented last October, the vows were completely forgotten and I gave in to the travel itch.

This was all Cebu Pacific Air’s fault! 😆

Kidding aside, I’m really grateful for the promo fares that Cebu Pacific offer its passengers. If not for them, I wouldn’t be able to travel to both local and international destinations with those exhorbitant fares other airline companies charge.

My friend wanted to go to Bangkok to shop for clothing to sell back home and when I told them of the promo fare I saw online for Clark to Bangkok, she said they’d avail of the promo. She also convinced me and pleaded me to join them too and I was sold *sigh*. I told a travel buddy of mine about the trip and he agreed to join us too. The plan was for all of us to fly to Bangkok together. But after my buddy made me realize that I’m no longer restricted to the normal 2-days off work schedule since I now own my work time, what used to be a 4-day trip became a week-long trip instead. Fireworks were popping up my mind as I immediately formulated a plan to do a side trip to Siem Reap. (light bulb!)

So when I announced to my parents that I will be travelling to Bangkok last January 2011 my mom immediately blurted out “Na naman? Anong gagawin mo dun?” (Again? What are you going to do there?)

(Being Bicolanos, our parents required us to speak Tagalog inside the house so that we won’t forget that dialect. That’s why my other Cebuano friends find my way of speaking the Cebuano dialect weird. That’s because it’s a mixture of Bisaya, Tagalog and Bicolano.)

And when I also told them I’ll go back to Cambodia, my dad blurted out “Di ba delikado doon?” (Is it not dangerous to go there?). I guess he was referring to the landmines and the war and conflict that he had heard from years before.

I immediately reassured them that there’s nothing to be afraid of when going to Cambodia. Especially that I’m still around and nothing bad has happened to me when I last went there. I used Cambodia and not specifically Siem Reap since I know he doesn’t know where that one is 😆

Parents. They’re always like that. Over-protective. But after explaining, they consented since they really can’t do anything to stop me from travelling. hehehe

exposed pictures of our balloon ride in Siem Reap in 2008, one of the reasons why I had to go back

Actually, this was my 3rd travel to Bangkok and my 2nd to Siem Reap. My first trip to Bangkok and Siem Reap happened last 2008. I love Siem Reap so much that I promised to go back to that quaint “not-so-little” town one day. And I never imagined that that one day would be this year. I was so excited. Finally I can take photos again of how wonderful that place is.

For my next blog posts, I’ll be documenting our detailed trip to Siem Reap and Bangkok, including the cheap places we stayed, the great food trips we devoured, the beautiful places we’ve seen and the exact money we spent for the entire trip. To give you an idea, I spent a total of Php 8,750.25 (~$197) for my trip to Bangkok and Siem Reap last January 18-25, 2011. That’s Php 4,296.00 (~$97) in Bangkok and Php 4,454.25 (~$100) in Siem Reap. This only includes food, transportation, accomodation and sight seeing in Bangkok and Siem Reap, not including the plane fares and bus fares from Cebu-Manila-Clark-Bangkok-Clark-Cebu and the travel tax and terminal fees in the Philippines

So do visit thetravellingfeet regularly as I’ll give you a blow-by-blow account of my 1st trip for the year 2011.

** Off to Bangkok and Siem Reap
#1 – You are reading this now 😉
#2 – Trip to Bangkok and Siem Reap: The Planning Stage
#3 – How to Create Your Bangkok to Siem Reap Itinerary
#4 – Arriving 5 Minutes Late on our Connecting Flight to Bangkok
#5 – En Route: Clark to Bangkok
#6 – Touchdown Bangkok!
#7 – Suvarnabhumi Airport a.k.a. Bangkok International Airport
#8 – Bangkok Train Station: Waiting for our Train Ride to Aranyaprathet
#9 – My First Taste of Authentic Thai Food