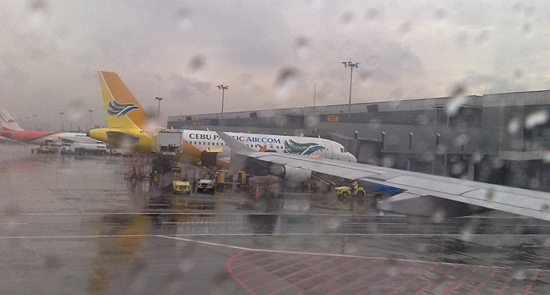 Who would have thought that even after all the preparations I did, I’d still end up like this? Late! Argh!

Ed and I agreed he should pick me up at my place at around 6am since the taxi’s normal route going to the airport passes by where I live. I woke up at 5 after a 1-hour nap. It was raining. By 5:30am (I think), Ed called me on my mobile phone and asked if I’m all ready. I told him that I was still taking a bath (yes, I bring my phone in our bathroom whenever I want to) and I’d just call him back when I’m done.

That was my mistake. I should have asked him to leave his house, hail a cab and wait for me once he reaches my place. The travel time from his house to mine was enough for me to get ready. Instead he left his place when I told him I just stepped out of the shower. He arrived at 6:15am. Since it was raining, the driver was careful in driving us to the airport.

The line outside the airport was long and I know we wouldn’t make it. I was about to go to that line when I saw Ed went straight to the entrance door and heard him call me. I didn’t know that was possible – to insert in the line 😆 He asked for the passengers to let us in first since we were already late for our flight and they gladly agreed. Still, we arrived 5 minutes after they closed the check-in counters. We tried to plead to the Cebu Pacific personnel to reconsider us since it was raining. I think there were 10 of us who were late. They wouldn’t budge. We were doomed.

blaming it all on the weather

Our only option was to become chance passengers on the next flight or book for a new flight. I immediately opened my laptop and checked the prices online. Either the cost was so expensive or the flight schedule won’t allow us to make it to our Clark to Bangkok trip. We decided to book as chance passengers and pay 3x the rate of our original plane fares. My Cebu to Manila ticket originally cost Php 1,359.68. But after the incident, I had to pay Php 5,656.00 for the rebooked ticket which covers the price difference of the original fare and the penalty fees. Ed had to pay 5k for his plane fare. Super Ouch!!!

The good thing was that Ed brought his credit card to pay for the plane tickets. If not for those plastic cards, we wouldn’t be able to travel. But we need to go on. So we swallowed the exorbitant amount just to be able to push through with the trip.

While waiting for the next flight to close its counters, Ed kept saying he won’t go to Siem Reap anymore and will just stay in Bangkok after loosing that amount of money. I had to convince him that we should still go to Siem Reap but he was half listening.

Then we impatiently waited for the the next flight to close its counters so that we can grab our chances on those seats where no one showed up for that scheduled flight. Even before they started calling out the names of the chance passengers, we were already behind the counters and Ed was quick to give our names. I was so relieved that we were the ones who were accommodated first. They tried to call a passenger’s name which was 1st on the list and since there was no response, we immediately told them that the person wasn’t there. So the person behind the counter got our names and processed our new flight schedule.

This was the first time I experienced this. Although it was a bad thing, to me, it was really a good learning experience. Not only did I learn how it’s like to suffer paying for something so outrageous because of being late but it also allowed me to experience how it is to book as a chance passenger. Although I had no plans of doing that again, at least when it does happen again, I’d be prepared. I just pity the guy whom I think was also on that list. A few minutes before they started calling out the names of the chance passengers, he asked if they were calling our names. We told him “No” so he walked away. When you happen to be a chance passenger, you have to be vigilant and if possible, stick your nose behind the check-in counters instead of being complacent since others would definitely get ahead of you.

It took some time before we finished checking in since they had to run the plastic cards. And after we got our tickets, we immediately heard our names being called to board already. Waaaaa. I think we were paged twice. After hurrying to pay for our terminal fees, and after the final xray, we  were running towards our boarding gate.

When we arrived in Manila, I happened to chat with this person while waiting for cabin doors to open. She said something like “Ganito talaga ang mga nala-late, nagmamadali makalabas.” I thought she was referring to us being late to board the plane so I kinda explained that “Na-late kasi kami kaya nasaraduhan kami sa counters kanina kaya nag chance passenger kami dito.” To my surprise, she said “Eh kami nga eh, 6:00 am dapat flight namin.” Whatda?!?!? Does that mean that the 6:00am flight got delayed and we were on board the flight for the supposedly 6am trip? I’m also not sure if Cebu Pacific Air joined the 6am and the 7:20am passengers in one plane. That may probably explain too why I never heard them announce back in Cebu that the 7:20am flight boarded already – that’s because they were still there waiting!?!?!

Upon hearing this, I didn’t know how to react. Was I supposed to be happy knowing that we arrived in Manila earlier than our original 7:20am flight? If it was indeed a blessing in disguise, it was not funny. Not funny at all.

P.S. This was not really an official connecting flight since we bought the tickets from Cebu to Clark and Clark to Bangkok separately but with the same airline companies – Cebu Pacific Air. The time interval on the two flights is 12 hours.