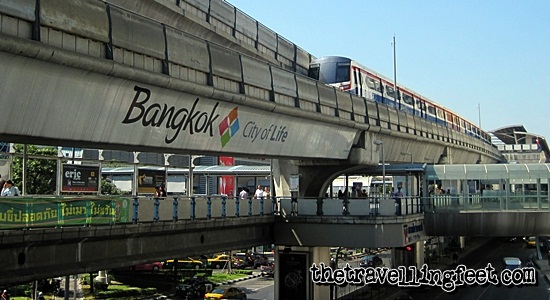 Bangkok, Thailand offers different modes of transportation for tourists and locals. So if you are planning to visit Bangkok soon, don’t fret for you won’t have problems visiting different places in Bangkok with all those transportation vehicles available.

You can certainly reach Thailand by plane, train, bus or boat. And when you arrive in Bangkok, the capital of Thailand, you’ll be amazed at the assorted transportation available for you to choose from.

Bangkok has different modes of transportation: bus, taxi, tuk-tuk, motorcycle, MRT, BTS, boat and train when going to nearby towns. Except for the boat and motorcycle (which only allows 1 passenger), I’m happy to say I’ve tried all of the rest! 😀

For those of you who wanted to go to a certain area and skip the city traffic, you can also try riding the River Express Boat. This is also a good choice of transportation if you want to feel the breeze coming from the Chao Phraya River.

During rush hour, the ferry boat gets crowded too. However, the fare is really very cheap compared to the other modes of transportation.

If you want to save time and money in transferring from one tourist destination to the next, you can take the River Express Boat. Since there are great tourist attractions you’ll pass by, you can simply ride one from the 1st pier and enjoy sight seeing as you ply the Chao Phraya River on to the last pier. Along the way, you will be able to see Wat Arun (Temple of Dawn), the Grand Palace, Wat Po and many more.

It only takes a couple of minutes for the boat to unload and load passengers so you need to be very quick or you might be left behind. I saw a foreign couple running towards the pier to catch the ferry boat that just docked but they weren’t lucky. I think it took less than 5 minutes for the boat to dock in the pier before it started its engine and headed for its next stop.

Bangkok is included in the Top 10 Worst Cities for Traffic around the world. So a ride to your destination via the BTS Sky Train may be the ideal choice if you don’t want to get stuck in traffic down below.

The great thing about riding the BTS Sky Train is that you will get a good view of the city from up above. Most of the shopping malls in Bangkok are accessible via the BTS so if you want to save money for transportation when you visit Bangkok, it is best to get hotels, hostels or guest houses near BTS Stations.

Aside from Bangkok’s tuk-tuk, our version of tricycles, buses are the most common mode of transportation in this country. If our country has jeepneys, Bangkok and Thailand in general have buses and tuk tuks. What’s great about these buses is that they are numbered and have designated bus stops. If you want to know your way around Bangkok with these buses, those free maps you’ll get in the airport, hotels, guest houses and from travelling agencies won’t do you any good since bus numbers and their corresponding routes are not printed on those maps. It’s best to ask a local what bus number to take when going to a certain destination or simply google the info. LOL. The asking part will be another challenge as some Thais may not be able to speak English well and won’t understand you too.

The good side about these buses are they are very cheap. It may cost you approximately 15 baht to reach a certain destination whereas a tuk-tuk driver may charge you 70-100 baht. And when you get lucky, you can find red buses with blue stickers (which a friend told me) that may take you to your next destination for free! Yep, Bangkok have free bus rides. I even got lucky to ride one of them. On my way home from the Chatuchack Market, I rode the MRT and on my way out, I had to ask the MRT security officer where to exit and what bus number to ride. I had to wait for around 20 minutes (waiting for your bus is one of the downside though if you are in a hurry) for my bus number and when I hopped in the bus, asked the conductor if I’m on the right one and asked how much the fare was, I was happy to hear that very beautiful word – “FREE”.

On our way to the Mo Chit Bus Station from the Airport’s Transport Center, there was a confusion with the bus we rode and we end up being dropped off at the bus station instead of the bus terminal. This wasn’t bad at all since we get to save on our expenses. I budgeted 85 per head for the Airport to Train Station fare yet we only spent 43 baht. Not bad at all!

Hopped on to this bus which charged us 24.50 for three heads from the Mo Chit Bus Station to the Hua Lamphong Railway Station.

If you want to save on your transportation expenses when visiting Bangkok, I would highly recommend taking the bus. Just ask what bus number to get on. And if you are travelling in shorter routes, hailing a taxi cab is also suggested. Case in point. From Soi Rambuttri to Siam Paragon (4.5km ), we only paid 47 baht for the taxi whereas a tuk tuk ride would have cost us 80-100 baht.

Motorcycle taxis are the same as the “habal-habal” here except that they only carry 1 passenger per trip.

This is by far the fastest way to travel within Bangkok especially when traffic reaches its peak during rush hour. The only downside to riding this one is that you will inhale all the pollution, you get exposed to the sun’s rays if you are OC about that and you may have issues with your safety. I’ve never ridden one since I never knew their existence until my friend mentioned he rode one in going back to where we stayed. I think he paid 100 baht for the trip. A little bit expensive but will surely get you through the congested streets.

If there’s a Sky Train, there’s also a subway train in Bangkok and that is the MRT. Those who go gaga over shopping may find the MRT convenient since this line connects to the weekend Chatuchak Market. From the Kamphaeng Phet Station (2nd station) to Hua Lamphong Train Station (last/18th station), I only paid 40 baht. From there, I just waited for a bus to take me back to where I was staying in bangkok. Not really bad considering the traffic I had to endure.

waiting for the MRT to arrive

I wonder how the BTS and MRT looks on a normal work week rush hour.

Instead of cards, you will be given this little black chip which you have to insert in the counter on your way out.

I find the BTS and MRT facility clean. The only problem with the trains (regular, BTS & MRT) are that their lines only cater to 3/4 of  the city. I say this based on the free maps we’ve been following. When checking out the map of Bangkok, the left side is your gateway to temples and other tourist attraction whereas the shopping malls are located in the center and the other right half side of the map is where you’ll see the train railways.

A common mode of transportation almost anywhere, a taxi in Bangkok may cost you cheaper than riding a tuktuk when going on short trips. During moderate to low traffic, taxi drivers charge by the meter. But when the traffic gets heavy (especially at night), fares will soar high since they’ll be charging you on a per trip basis.

When this happens, you can either haggle with them or get off and take the next taxi and see how the next driver will charge you. Also, you may have to pay for toll fees too. This could happen on trips going back and forth the Suvarnabhumi Airport and other areas.

Bangkok’s Hua Lamphong Railway Station is situated in the heart of the city. It provides commuters cheap fares to nearby train stops and towns within Bangkok and the province of Thailand.

passengers gets cozy on this 6-hr train ride to Aranyaprathet

Perhaps one of the most distinct transportation that screams Thailand is this vehicle. Although there are also tuk tuks available in Cambodia, the design of the two is different.

Till now, I still don’t know the basic rate when hiring a tuk tuk. Sometimes, tuk tuk drivers charge 70-100 baht for a trip to the shopping malls if you are coming from Khao San Road. Also, I hailed a tuk tuk once since my feet were too tired to walk 3 blocks from where I stayed and the 1st tuk tuk driver wanted to charge me 100 baht. No way! The second one asked for 60 baht and I haggled for 30. Despite grumbling and scratching his head, he agreed. So your haggling skills will definitely be put to use in situations like these. Otherwise, it’s best to just walk or ride a taxi, which I find cheaper plus the fact that it’s air conditioned too.

If you are in a hurry to reach a certain destination while carrying loads of shopping goods, hiring a tuk tuk is the best choice especially during rush hour since the streets will be packed with vehicles. You just have to brace yourself and hold on tight to your seats as some tuk tuk drivers can drive madly and you might be thrown off your seat. Just remember that before riding a tuk tuk, discuss with the driver the cost of the trip.

And if you’re up for more adventure, you can also help this baby elephant find its parents and maybe get a free ride too. Who knows? LOL

You might also find this useful:
Things to Consider When Planning Your Travel Itinerary
The Cheapest Way to Bangkok from Suvarnabhumi Airport

Palawan: A Destination Worth the Wait