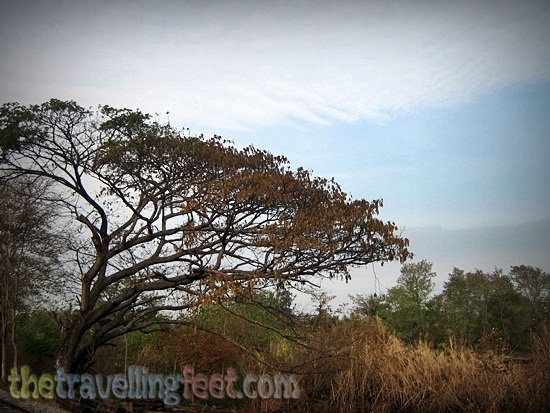 After our arrival in Bangkok, we had a bit of trouble finding our way to the Hua Lamphong Railway Station and we were grateful that we still made it in time for the 5:55am train schedule that would take us to Aranyaprathet, where Thailand’s border is situated. We planned to cross the border going to Siem Reap in Cambodia and since we do not want to spend around 300-400 baht for a bus ride going to this place, we decided to ride the train instead where we only had to pay 48 baht each. This was my first train ride experience.

I never knew what to expect on this ride. I couldn’t picture something like those we see in India since this was Thailand but I wasn’t being complacent too. Once we boarded the train, we walked to the farthest end of the train where we found cushioned seats and settled our stuff. Across our seat were two Caucasian couples (i think) who were also on their way to Siem Reap. I think I was expecting the train to be filthy and smelly but I was wrong. Although this was not a luxury train, I can manage riding this one since it doesn’t stink at all.

While waiting for the train to leave, we managed to take a couple of photos and bought food from peddlers selling sticky rice, beef/pork, water, juice, hotdogs and all other stuff.

me, after a quick nap; Donnie, wide awake and ready to kill

The guy in the yellow shirt was with this girl in a white tank top below. We were teasing Donnie with that guy over there.

posing after the nap

another signature pose from Donnie and Leah

Donnie and his hotdog 😆

This hotdog on a stick really tasted weird. But since it was a waste of money to throw it away, Donnie just consumed all of it while constantly complaining how yucky and weird it tasted.

The train ride was a scenic 6-hour trip. The farther we travelled out of Bangkok, the lesser we saw houses. Instead of seeing greeneries everywhere, all we can see were those dry looking trees and the brown earth. The road going to Siem Reap is even worse (not in the bad kind of way). Instead of brown soil, you’ll see red earth soil + “malnourished” cows.

It took us 6 hours to reach Aranyaprathet since we had to stop at every train station we passed by to pick up passengers.

The train is also equipped with its own bathroom so in case nature calls, you don’t have to wait for the next train stop. And since you are travelling out of Bangkok, you’ll get the chance to get some fresh countryside air.

If you are planning to go to Siem Reap via Bangkok and if you are not in a hurry, I would suggest you take the train so that you can see Thailand’s country side. Riding the train is also ideal especially if you are on a tight budget.

6 Reasons Why You Need to Visit Johor Bahru