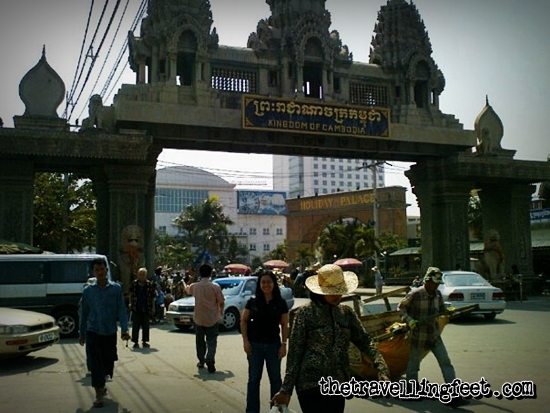 This is a continuation of the articles I wrote here:

After arriving in Aranyaprathet, we hailed a tuk-tuk to take us to the border. We went inside the immigration office in Aranyaprathet, filled up some forms and handed over our passports. Since we were going out of Thailand, we had to go through these steps, the same ones we’ll be doing when we reach Poipet and back. We filled up these forms with our information in it – name, address, visa number, address in thailand, address in siem reap, etc. They’ll attach the form to your passport and the receiving immigration counter of the country you’ll cross will take it off and replace it with the form you will fill up in their office.

I realized that Poipet was just a few meters away from Aranyaprathet. Aranyaprathet and Poipet are the towns that separates Thailand and Cambodia.

Being on a country where immigration counters are only evident on airport terminals (or peraps on ports in Mindanao?), I had no clue how one looked when crossing borders. Also, this was our first time to travel out of the country so we were kinda clueleess on what to expect here.

After going out of that immigration office in Aranyaprathet, we went out, walked a few steps and looked for the same immigration counter in Poipet. We then found this sort of like guard house where police officers were stationed. We tried to ask them for help but they told us we need to pay a certain fee for that. Upon the mention of the fee, I immediately told my companions to walk away and keep looking for the immigration office.

Prior to our departure, I did a couple of searches online and found out about these types of scams. They’d sort of like extort money from you but in truth, we don’t have to pay anything.

So the best way to confirm this was finding the immigration counter ourselves too.  And at last we found it! It looked like your usual LTO counter or even a Lotto outlet where you just line up and hand over your passports and that immigration form again. We then confirmed that since we are holders of a Philippine passport, we don’t have to pay any fees unlike other countries. During this time, I learned that if your country is a member of the ASEAN organization, you are free to travel within its member countries by merely using your passport. That was a relief!

After we collected our passports, we were then greeted by a couple of drivers who were trying to convince us to take their cabs. I guess it was due to some horror stories we read online about hiring these drivers only to find out being ditched on the road that we didn’t pay close attention to any of them. There was a bus waiting there and someone kept telling us we can ride the bus for free and they will take us to the official taxi office of the country. Still clueless and without any choice at that moment we just rode the bus. And while we were in there, the guy asked us to give him a $5 tip. He kept saying that the taxi would cost us $45. I guess that one included the tip for the guy. When we reached the terminal, we again asked how much is the rate to Siem Reap and they said $45. At this point, we had to question them since we read on online forums that it only cost $40 for the trip. We were also hesitant about our online readinsg since our sources were dated 2 years back.

By this time, we found a traveller and asked him if he’d like to split the cab fare with us. We didn’t agree with the $45 cab fee, we insisted on paying for only $40. It even came to a point where they got angry at us and started shouting because we won’t budge in with their rates. They refused to give us a cab if we don’t pay the $45 taxi cab fare first. It’s like pay first, ride later. Of course we didn’t agree to this as they might ditch us in the middle of nowhere! I guess one cab driver took pity on us and agreed to take us to Siem Reap for only $40. That was really one awful incident back then and we were just glad we got out of there.

Over the next few hours, we travelled in the “wilderness”. It was really a bumpy and dusty ride. Good thing we were riding on an airconditined taxi cab. Oh, when we read some information online, it was mentioned that the make of the taxi cabs were that of a Toyota Camri. But not the grand one, ok? The taxi cabs were really the ugly camris. sorry. I couldn’t help but notice but they were indeed the old and ugly Toyota Camris.

As we travelled, we had a visible view of the soil in Cambodia. It was orange. I’ve never seen so much orangey looking color in my life. The dust was colored orange. Houses we passed by were covered with orange dust, so were the trees and grasses. The tractors that were fixing the roads were covered with orange mud. The cow was also covered in orange dust. Speaking of cows, my friend couldn’t contain from commenting that the cows in Cambodia were malnourished. This was because all the cows we passed by were too thin. They were just tied along the road grazing on the orange colored grasses on that barren land.

I also learned on this trip that airline companies pay the Cambodian government to not fix their roads from Thailand to Siem Reap so that foreigners will be forced to go to Siem Reap by plane. This was what I learned 2 years ago. I am not sure if the situation there had already improved or if it’s still in the same state now.

One thing’s for sure though. On this trip to Siem Reap, I realized that I am lucky to be a Filipino. I am lucky to have the Philippines as my homeland where we are blessed with abundant natural resources and we get to experience this. We may also have issues with our country but despite our government’s shortcomings, I am so grateful that I am from the Philippines.

P.S. Due to the horror and ugly scene we had at the Taxi Office, we failed to capture shots of the road going to Siem Reap.

3 Tech Tips for Travelling to Japan – How to Stay Connected