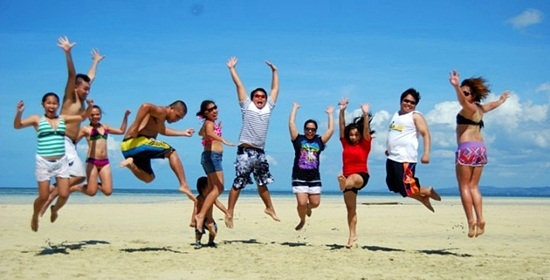 Before we knew it, the year 2010 was a thing of the past. But for me, I can say that it has given me the greatest opportunity of my time. It has opened my eyes to more favorable circumstances and it has paved way for allowing me to be where I am now.

But where exactly am I? Well, let’s just say that I am enjoying my freedom as we speak, waking up whenever I want to, not minding the rest of the world as it continue to move its pace, me not included.

I  never knew before that having the ability to be an internet junkie could really bring you to greater heights. I do not even had the slightest idea that there are great opportunities that await online.

Thanks to my other website, I was able to win an overnight stay for two at Sumilon Bluewater Island Resort. I. got the chance to bond with my sister in this serene place last April (since the GC was about to expire). I also won cash money at the Cebu Blog Camp 2010, courtesy of blogger Sinjin Pineda, where I lavishly spent the prize on a TNF Amira Backpack. Now it goes with me wherever I need to bring Lenny. I also won a Torque phone courtesy of SM Cyberzone. There really are abundant opportunities that you can take advantage of once you get to have your own website. Maybe I just got lucky too and couldn’t be thankful enough for having been given the chance to obtain these rewards.

It was also in April where I got the chance to tag along my colleagues as they went to Nalusuan Island for their Team Building. Despite the low tide, we still managed to have a good time and enjoy the beauty of this private island resort.

2010, a year of camaraderie and learning

Last May, I joined other bloggers from Cebu and the rest of the country for the Cebu Blog Camp 2010.

Then on October, me and my blogger friends went to Manila to attend WordCamp 2010. Being WordPress users, I thought it would be cool to attend this event and also see the man behind WordPress.

And last but not the least, me and a couple of Cebu based bloggers stormed Iloilo to support the Visayas Blogging Summit.

On these three gatherings, I got the chance to meet very interesting people who have also inspired me to hone my craft as I continue to share what I had to say.

At the Cebu Adventure Cafe, I got to ride my first zipline. On one of our island hopping Team Building activity, I finally learned how to tread water without fearing I’d drown the instant I let go of my hand on any floating device! This was such a great relief on my part since I’ve long wanted to learn how to swim. I still don’t consider myself a pro though.

me squirming and giggling while in a state of panic

Thanks to blogger friend EJ‘s invite. We got to visit Crocolandia and although my attempt at riding a live crocodile failed (as if!), I got a more rewarding treat when I carried a python on my back. I hate snakes! As in! So I was also shocked at myself when I agreed to carry one – and not just an ordinary snake but a python at that! Well, I guess its the color that gave away. If it were a black python, I wouldn’t probably dare touch it.

Still feeling the adrenaline rush and confident I’m wearing my super cheap beach shoes, I climbed the sharp rocks at Kenyama Beach Resort at Guisi, Guimaras when we visited Iloilo last November. I even jumped on a not so high cliff too.

Two of my relatives came to pay us a visit and I got the privilege to tour them around the city. I flunked as a tourist guide because I realized that I too am a foreigner in my own city. There were instances where we had to ask for directions or I got lost trying to find the place where we’re supposed to go or that I ran out of ideas on the best touristy places my visitors should go to.

Edwin and Mai riding one of the tricycles in Argao, Cebu

Friends from Ilocos also dropped by and I was glad my hands were not full, which gave me more time to accompany them on their short trip to the city of Cebu and south and also took part in the launching of Edwin Antonio’s book entitled Around the Americas in 60 Days.

After my hosting stunts, I mentally noted that I had to come up with an IT for future friends coming over the Queen City of the South but am not too sure about the progress on that mental note. I think it’ll forever be on my mind. hehehe

Of all the things I never expected, it is on this year that I bade goodbye to the corporate world. The unexpected happened. I really never imagined myself retiring before 30. I mean who would do that? Right? But with my new found interest for anything that involved online stuff, I took the risk and banked on my not so honed skills.

They say that life starts at 40. I realized that before I’d reach that point, my corporate job might have probably sucked my whole being leaving nothing for me. So instead, I made the decision to free myself from the slavery and get on with my life. I’m starting a whole new chapter of my life now at 30.

So long as I have colleagues who share the same interest as I do, and for as long as there’s internet connection anywhere, I am confident I can manage.

meeting up with fellow travellers

The best part with my retirement is that I get to own my time and insert meeting fabulous people. I consider myself a travel junkie so this bold move will definitely allow me to travel anywhere I want and reach destinations I’ve only imagined in my dreams.

At the end of the day, I am thankful for the set of friends I have – straight or not. This was what made 2010 special. Being surrounded by people whom you can count on and being able to start living your life to the fullest.

2010, you are a good job! But now that you passed on your torch to 2011, I am looking forward to more travel opportunities, the chance to meet new folks and more fun while I try to live my life the way I’ve always wanted to.

9 Things Not To Miss When in Hong Kong