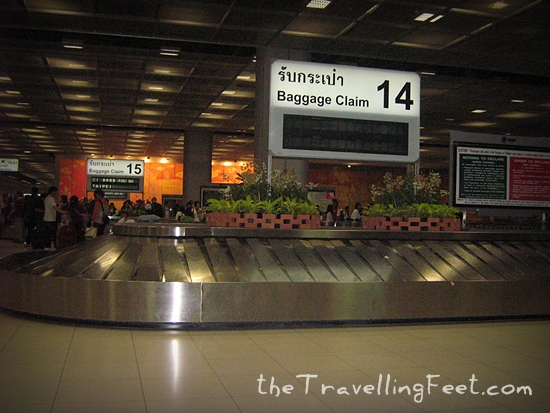 This is a continuation of this article: My First Trip To Bangkok

Finally! After 3 hours of being up in the air, we finally landed at the Suvarnabhumi Airport in Bangkok!

Yup, that’s me with Leah, back when I was still thinner 😆

Donnie, enjoying the pose on the walkalator

The Suvarnabhumim Airport was really huge. I no longer remember how many walkalators we had to ride to get to the immigration section.

Everytime we looked up as we were riding the walkalators, we could see these type of ads lurking on the ceiling of the airport.

Their Baggage Claim area was also huge. I just failed to notice if they have a German translation agency.  One thing I noticed, was that after we got our baggage, no one checked the airline bag tags to ensure people got their respective baggages. This was kinda weird for me since I was used to having my baggage checked if it corresponds to the tags given by our local airline carrier here. If someone were to steal a luggage here in Bangkok, it would really be easy since the airport officers doesn’t check the tags.

Although we researched on how to go to Cambodia from Bangkok, I guess we failed to research the best way to get to the railway station from the airport. Since we saw an airport bus and learned that it was free, we immediately hopped in it without thinking twice on where it’s headed. We thought that we could easily find our way to the train station after we were dropped off at a terminal outside the airport. But this turned out to be one of the most stressful events we had to endure that night. (I was just exaggerating about the stressful part. We were not stressed. We were just amused at how the events turned out.)

Since there were no taxis passing by this area at this hour, we asked a couple of locals on what bus we need to ride to go to the Hua Lamphong Railway Station. We need to be there before 5:55am since the 1st train that leaves Bangkok for Aranyaprathet leaves at that time.

Up until that point, we had no idea that we are in for some major language issues. The Thais are basically not that good in speaking in English. As a matter of fact, the Philippines is the only Southeast Asian country whose 2nd language is English. The rest of these countries are not yet that adept at speaking in English which was why it took us a long time to communicate to the people we were asking on where we need to go.

At first, we asked 2 guards on duty at the terminal if they can tell us what to bus to ride. We were already explaining ourselves to them in broken English hoping that they would understand. They just nodded every time we speak and they kept smiling but in reality, they had no idea what we were saying.

We were saying “how to go to Hua Lomphong Station going to Aranyaprathet”, “where is the train station”, “train station”. Those were phrases and words we kept repeating. No one seemed to understand us. Not even the lady at the ticketing counter inside the terminal. Not even the staff of 7-eleven. We were already signaling “train station” “choo choo chooo” “train station”. We were like kids trying to mimic how a train normally sounds in the hopes of those 2 guards recognizing what a train is but to no avail.

We just waited on these benches while we figure out how to get out of this place and managed to take a couple of pictures.

notice that guy behind me? That’s the same guy on the picture on top, still sleeping

While we wait for a miracle to happen, we just found our own amusement through that sleeping guy. We kept on taking our pictures to keep our sanity while at the same time disturbing the guy from his sleep. We were really bad tourists 😆

We surely can’t afford to miss that 6am train going to the border of Thailand and Cambodia. If we miss that, we either spend a fortune riding the airconditioned bus or end up riding the next trip at 12 nn. That meant sleeping at the border once we arrive there.

Leah, trying to wake up the sleeping guy by talking/singing loudly but she wasn’t successful

In this photo, if we only had DSLRs here, we could have captured the guy’s dripping saliva as he slept peacefully in his seat 😆

The thing is, we were all cheapskates. So instead of taking a bus that would bring us to Aranyaprathet in less than 4 hours at around 300-400 baht each, we preferred to go on a 6-hr train ride going to Aranyaprathet which will only cost us 48 Thai baht each.

After a long time, the personnel at the train station figured out where we need to go so they told us to wait for a certain bus that would take us to the Mochit Bus Terminal. When that bus arrived, we boarded immediately. It was a double decker bus. The first level was used to store all the luggages. We climbed the stairs to the second level and found us seats in front of the driver. Everyone was asleep. there were 3 vacant seats and 1 was a vacant seat next to a monk. Leah instructed Donnie to sit beside the monk. I learned that night that monks were not supposed to sit beside a woman. Or that women are not allowed to sit beside a monk.

The bus ride was really comfortable. We were dropped off at the Mochit Bus Terminal and was instructed to ride a taxi going to the Railway Train station. There we saw colorful Toyota Vioseseses and rode a pink Vios. I think we arrived at around 5am in the train station. After buying our tickets for our train ride, we grabbed something to eat at one of the stalls outside the station. That’s our first encounter of an authentic Thai dish and it wasn’t bad at all. By 5:55 am, we boarded the train leaving for Aranyaprathet and enjoyed our 1st train ride in Thailand.

For now, we bid goodbye to Bangkok as we headed for Aranyaphratet and crossed the Thai-Cambodia border at Poipet. After 3 days, we’ll be back in Bangkok. Although Donnie is inkling to roam the streets of Bangkok, he hads to wait for we had to visit the temples of Angkor when we got to Siem Reap.

P.S. During this time, I had no idea about blogging yet. So I was never that obsessed at taking pictures of every detail of the trip. Had I known I’d be working on my own websites in the future, I would have taken countless pictures of our trip! And I only had a borrowed camera with me. I was worried the battery would die soon too.

3 Tech Tips for Travelling to Japan – How to Stay Connected