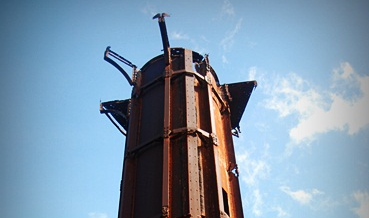 This rusting 18th century lighthouse in Guisi had writings that said “Guina diLi an ang Pag saKa Kay diLiKado”. In English, it meant “No one is allowed to climb up since it is dangerous”. So upon seeing that warning, we didn’t bother climbing since we weren’t too sure if this old lighthouse was stable enough to hold our weight. We  just took our pictures below.

But when the care taker of the place asked us if we’d like to climb up and gave us the go signal to do so we hurriedly climbed those rusting stairs leading to the top!

Let me show you…

holding ed’s feet in case the wind blows in our direction – as if this would help. hahaha

A boat passed by with passengers bound for an island hopping tour and we can hear the boatmen shouting at us and scolding Ed to get down from where he was standing but he just turned a deaf ear on them 😆 This was pretty dangerous, and should we have been in another country where we couldn’t understand the language, somewhere in Europe like Germany, we may have needed some kind of German medical translation to help us resolve the problem.

ed on top of the top with edwin

Aside from this magnificent view from the top of the Guisi Lighthouse, we also discovered another haven at the foot of the hill at the Kenyama’s Beach Resort.