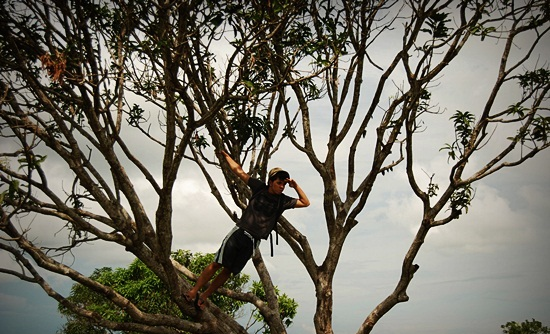 This was my first time to visit the island of Guimaras. And instead of maximizing the trip for a whole day tour of the island, we arrived here late and had to make do with what’s left of our time. We arrived at 12nn and the last trip leaves at around 7pm, from the port of Buenavista (I think). And since we wanted to see sights from one end to the other, we decided to rent a tricycle for the afternoon tour as this would be more convenient. We couldn’t afford losing time while we wait for other passengers to occupy the jeepneys if we decide to ride one.

edwin, taking a picture while holding on to dear life on the moving trike

We were offered 1,200 for the afternoon trip. The lonely planet book suggested that the maximum rate was at 900 but we had the 2006 version. I would have haggled for 900 but Ed immediately haggled for 1k. Then it was agreed. We were assigned a tricycle driver to take us to the places we indicated where wanted to go that afternoon for P1000. Going to Alubihod for a one way trip normally costs P250 and the roundtrip fare is P600 as what our driver, Kuya Jun, told us. But if we were to include him in our meals, he can settle for P500. Then going on the other end of the island, which is in Navalas, would require an hour of travel time which explains the 1000 fare, I guess. However, I still found the rate too expensive. It was a good thing there were three of us to share the cost of the transportation.

Our first pit stop was at the town/barangay of San Miguel where the Trappist Monastery is located. I wasn’t too overwhelmed with the chapel. It was plain-looking – sorry.

Then a monk appeared and greeted us. He invited us to have coffee while we exchanged a few chats. He mentioned that the next time we drop by Guimaras again, we should bring him a Sto. Niño de Palaboy as a gift.

He also asked us to write our prayers or petitions in case we have one.

After our coffee break, we thanked him and bade him goodbye. We headed to the Trappist Gift Shop where we bought some food.

The Cogongrass Fields Along the Ravina Road

We made a detour on this great looking field which Ed saw. He immediately asked the driver to stop and we headed for that lone tree. It was full of cogongrasses and it was here where we had fun taking pictures without minding the cogongrasses slowly slicing our legs and arms with their sharp blades.

After our photoshoot here, we then headed to Alubihod. Our tricycle driver asked us if we wanted to go to Raymen’s. I asked if there’s a different beach which wasn’t crowded. His suggestion was Villa Igang. So off we went to this place.

overlooking the beaches of Alubihod

There was a P100 entrance fee when we reached the area. I learned that Raymen’s Beach only asked for P10. We didn’t mind the rate since we don’t want an overly crowded beach.

When we reached the place, we ordered food for lunch. There’s no menu available. Every dish was priced at P180. Whatever meal you wanted, the charge is P180 which is good for 2-3 heads. So we ordered daing na bangus (fried milk fish cut in half), sinigang na shrimp (sour shrimp soup) and sinugbang baboy (grilled pork). While we waited for our food to be cooked, we were told we could check out the caves.

And so we did…

the other side of the cave

the sea water was so clear

On our way back, our tricycle driver led us to a different path where we witnessed the beauty of this resort. The sight that lay before our eyes was truly spectacular.

i wish i can live here

Soon, Ed decided to jump in the water. Edwin came looking for us to let us know we need to go back since the soup was getting cold. But upon seeing Ed jump in the water, he too got distracted and joined Ed. If not for the soup, I would have jumped too.

But we had to go back since we were running out of time and we had to go to the northern part of the island to check out a 17th century limestone church in the town of Navalas.

After our late lunch, we promised to go back to this place 2 days after to go on island hopping and continue with the cliff jumping sprints.

A Taste of the Guimaras Mangoes

After almost an hour of travelling, we stopped by this mango stall. Since mangoes weren’t in season yet, we just bought 1 kilo to taste them as we continued our trip to Navalas. The mangoes were really sweet. I could only imagine how sweet they’d be when they’re in season. Yum!

ed, slicing the mango; edwin eating one while on the road

The Navalas Church and the Rice Fields

When we arrived at the church in Navalas, I was kinda disappointed since I was expecting a magnificent structure for a 17th century church which was indicated in our Lonely Planet book guide. Actually, I think the only remnants of the church being made of limestone were the front facade of the church and some of the side walls and fences surrounding it.

I expected to see a whole limestone structure for a church but was dismayed when I saw that it was now replaced with modern interiors.

side of the church

Oh, and instead of going directly to the church, I got more enticed at checking out the rice fields beside it first and took some pictures there instead.

Our trike’s clutch got busted too so the driver had to repair it. When done, we headed to Roca Encatada to check out the rest house of the Lopez clan but there was a P50 entrance fee so we decided to head back to the port instead.

It was already past 6 in the evening when we reached the Port of Buenavista. There were no tickets being sold anywhere. We were told that we just had to ride the boat and we can pay there. The fare was P16.50 since it was already night time. The daytime fare was 16.00 from this port. We arrived in Iloilo City before 7pm, I think.

For someone like us who never planned what places to go and see in Guimaras except for the stuff written in the 2006 version of the Lonely Planet Philippines, I could pretty much say that our half day trip to Guimaras was a huge success. We had so much fun!!!

In a span of 6 hours, we were able to visit the Trappist Monastery, had photoshoots with the cogongrasses while getting cuts and bites from the grasses and ants, went for a dip in the clear waters of the Villa Igang Beach Resort, ate the sweet Guimaras mangoes, visited the Navalas church and had fun taking pictures on one of the rice fields in Navalas. And to think we never knew what was in store for us in this beautiful island in Panay. I am so in love with Guimaras!

And since we can’t easily shake off the fun we experienced at Guimaras, we decided to go back and made arrangements with our tricylce driver, Kuya Jun, to fetch us at the Jordan Port and explore Guisi Beach and go back to Villa Igang.

Will be posting a separate entry for Villa Igang so watch out for that.

A Quick Tour of the Mactan Cebu International Airport Terminal 2