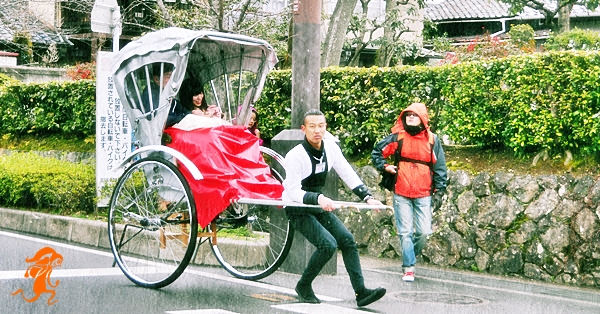 Getting lost in Kyoto was something I never expected to happen. Despite how technologically advanced a country is, some may still have trouble finding their way because of language barriers. But when in Japan, there’s nothing to worry since the locals seem to be welcoming and are ready always to lend a hand. Quoting from Professor Dumbledore, “help will always be given in Japan to those who ask for it.”

Now that we knew where we were headed, we patiently waited for our train to bring us to Arashiyama. The Bamboo Forest, one of the famous tourist destinations in Kyoto, was on the first of our list since this was located on the outskirts of Kyoto.

waiting for our train at Matsuo-taisha Station bound for Arashiyama

There weren’t too many people waiting for the train station. When it finally arrived, we hopped on. A few passengers were already inside but there were still a lot of empty seats. Our short train ride to Arashiyama Hankyu station was pleasant. The seats inside the train looked posh. I think the train’s interiors were designed that way for tourists who frequent the area.

Slowly, the snow flurry dissipated. When we alighted from the train after reaching the station, we searched the area for any signs where we should go next. We saw none. Or perhaps we just missed any signage. The people who were with us on the train magically disappeared leaving us alone on that station.

Without a clue on where to go next, we approached an old man manning the station booth. My friend started talking to him in Japanese asking for directions. I never understood any of it. All I saw were hand gestures telling us to go somewhere. After bowing our heads and expressing our gratitude, we slowly walked towards the road where he told us to go.

Our walk offered us a scenic view of a bustling town ahead.

We passed by native Japanese houses, which we believe were restaurants or some form of establishment due to the presence of a few signs hanging on its entry way. The place reminded me of the rural houses in our province in Bicol with the sight of those bamboo fences or bamboo walls. But the view here are more elegant-looking especially with the addition of landscaped gardens. Everything looked neat and clean.

After walking past a bend, we saw a bridge and realised we had to cross it to get to the other side. You could visibly see people walking to and from the bridge. Some even wore traditional kimonos.

There were a lot of jinrikisha or rickshaw drivers too. Some with empty carriages while some were helping tourists to get comfortable before they start their tour. We never attempted riding one and never bothered asking how much since we assumed that we could not afford it. Also, it would be a pity for those lean Japanese to carry heavy weights. So we couldn’t find it in ourselves to ride a rickshaw even if we could afford it.

Once we reached the other side, more restaurants greeted us. I guess the town expects a huge influx of tourists all year long and those establishments are for the tourists’ convenience.

What I noticed is that there are limited transportation in the area. The streets were almost empty most of the time. Unlike in our country where you could easily hail a jeepney, taxi, or bus, in Arashiyama, you’ll have a problem finding one. You cannot easily ride a taxi too unless you are willing to pay more than 2000 yen or more depending on your destination (metered rate). Buses are available but you can only ride one at their designated bus stops.

Still unsure how to reach the bamboo forest even though we knew we were almost near the area, we just relied on our map even though we thought that it wasn’t quite useful.

random store in the streets of Arishayama

We could have easily asked for help but we were too stubborn to ask anyone. All we know is we’re looking for a JR train station in Arashiyama, which will bring us to the Bamboo Grove. It started snowing again and we just had to bear with it and continued our search.

selfie with the snow flurry

At one point, we saw a post office in the area and I could not resist not dropping by. I collect stamps and if I have the chance, I buy one on my travels. So I was delighted when I learned that the post office sells philatelic stamps. It was pricey, actually, but the price was worth it. I don’t normally buy souvenirs, to be honest, but this one’s an exception. 🙂

When we left the post office, the snow flurry started to pick up its volume and soon it looked like the entire road were filled with soap suds falling from the sky. We had to find a temporary shelter to avoid getting drenched.

When it stopped snowing, we resumed our walk again till we reached the end of the road. We made a left turn as indicated on the map. Thinking that we got lost again, we had to finally ask for help. We saw two Japanese students walking towards us and my friend asked them for directions.

After what looked like some hand gestures showing us the way, I was surprised when they made a u-turn and walked towards where we were headed. Amused at what I saw, I asked my friend what’s happening. She said that they will go with us to show us the way. Oh my! (Makahilak ko’g popcorn! Ka nice nila uuyyy!) I was starting to realize how kind and helpful the Japanese are. It dawned on me that they would really go out of their way to help anyone. I’m not really well-travelled, but after my previous trips, I think it is safe to say that the Japanese tops my list of being the most helpful people in the world. I never witnessed anything like it before, everrr.

the  SagaArashiyama station in Arashiyama, Kyoto

We finally found the JR station thanks to our young guides. If we rode a train bound for SagaArashiyama from the Kyoto Station instead of the bus, we could have reached this train station in just 17 minutes! But it wouldn’t be frustrating and fun at the same time – getting lost, that is. After thanking the young girls, we entered the station and saw that it was not like most of the train stations we’ve been to. It was spacious and there were only a few people inside.

We approached the counter to buy our train tickets to the Bamboo Grove. They were telling us that the tour will cost us 600 yen per head. That must not be right. We could see in the map that we are so near the place and we are not interested to go on a tour package. We had to clarify again where we were headed. It turns out that we don’t have to ride a train to reach the bamboo forest. We could go there on foot. The tour package being offered is for the Sagano Scenic Railway, also known as the Sagano Romantic Train or Sagano Torokko, a sightseeing train line that offers you a view of the mountainside of Arashiyama while riding old fashioned train cars.

We ended up laughing because of how silly our predicament looked. Couldn’t it get any better than this?

It was probably past 1pm and we decided to have lunch first before we continue our misadventure. The station had a diner where a few stalls sold different food varieties. Without knowing what kind of food I’m getting, I ordered tempura soba and what looked like siopao or white bun.

The ramen looked weird though because of its color but it’s taste was quite alright despite eating a cold ramen version. My friend simply ate the food she bought from Lawson the previous night. She hoarded onigiris and thought she could eat the whole lot during dinner but failed to consume everything.

After our quick lunch, we started heading for the Bamboo Grove passing by a narrow road at the side of the train station.

passing by the bike rentals garage, which is a great way to explore Kyoto if you know how to ride one

There are no English signages in the area showing where to go. Less people walked on this path too. We simply followed the road hoping that we’d soon reach the forest.

When we finally saw the end of the road, a bigger one greeted us. To our delight, we saw people again, this time, a handful.

Observing the area, we saw tourists going in an out of a small road. We followed suit. Then we started seeing bamboos from a distance. It must be the right place. It should.

Searching for hotel deals in Kyoto?