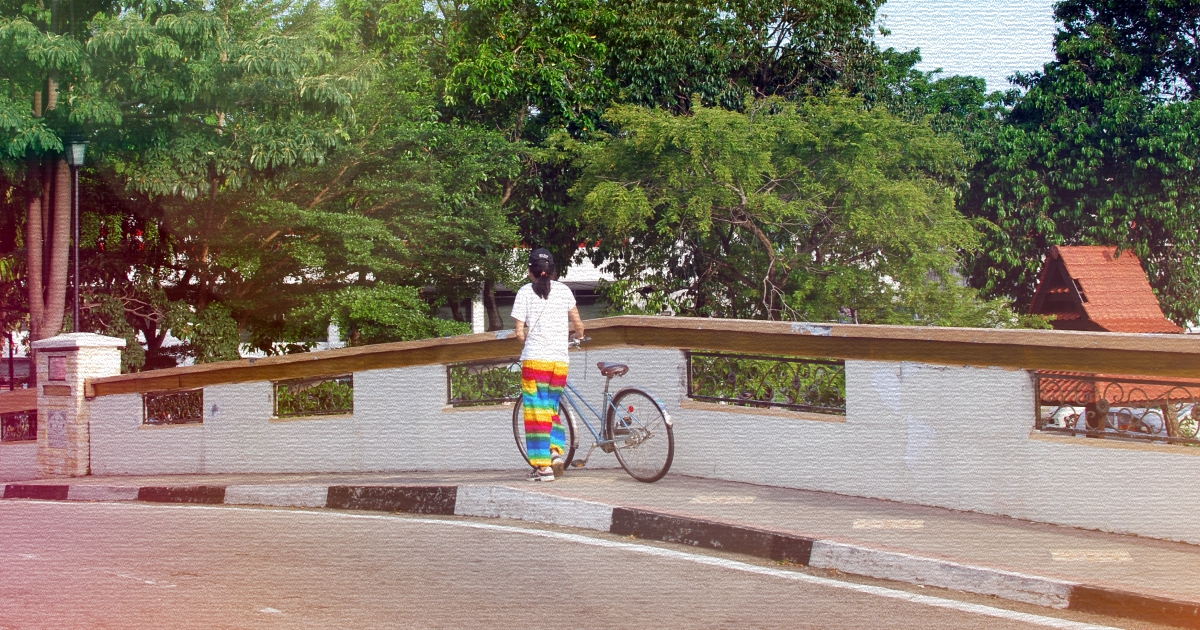 I had to stare at this simple yet beautiful artwork for a good 15 minutes before my Uber driver arrived. He was caught in traffic, his text message claims. Not that I doubt him, but the roads are kinda empty on this side of the world so I’m not sure what traffic he meant. But the moment he arrived, he apologized profusely for being late. And as we began our 13-minute drive to get to my destination, for some reason, I found myself enjoying my conversation with my Uber driver, Ahmad or Mad as what his friends fondly call him.

Upon entering his car, the first thing he asked me was where I’m from. I said Philippines.

“Oh, my mother just came from the Philippines,” he blurted out as he cruised the road to our  destination.

Then he said Cuba, which made me confused. Still he insisted it was Philippines and to prove his mother went to my home country, he started scanning the photos from his gallery and showed me a photo of what looked like a river and then a magnified photo of women seated on a bamboo raft, with a waterfall in the background. I thought it was Pagsanjan Falls at first and told him his mom might have been to Laguna. To make sure we know the right place, he started dialing his mother’s phone number and asked her.

We both learned that it was Cebu and the other one sounded like Tacloban. But that doesn’t make sense. So I’m guessing her mom went to Cebu and Tagbilaran in Bohol, Cebu’s neighbouring island.

Oh, I forgot to mention that he was doing all the phone browsing and phone call while driving. It kinda bothered me a bit but I guess it was alright, lah.

On my recent SEA adventure, I have this habit of asking drivers what’s their favourite food so that I can look for it and try it out. Since Ahmad seemed to be too eager to talk, I asked him what his favourite food is.

He said it’s Asam Pedas. It’s supposed to be a fish dish and he proudly says the best fish to try was Pari. He struggled to explain what a Pari ‘fish’ looked like so he relied on trusty Google to do the searching for him while driving. And when he found the photo, he immediately called my attention. Upon seeing the photo, I was shocked!

I didn’t know what to feel when I saw the photo, to be honest.

“But isn’t that endangered?” I asked laughingly.

Guys, the photo he showed me was a photo of this particular ‘fish’

And we both laughed at my question. Again I asked, “That’s supposed to be endangered, right?”

“Uhmmm. Not when it’s dead already.”

I just had to laugh at his comment and wondered what my ocean warrior friends would say if they were in this situation. So I did the next best thing. I asked Mad (feeling close) what’s the second best fish I should ask if I order an Asam Pedas. He said Tenggiri would be great too. I had to ask him if Tenggiri is a normal fish this time and he assured me that it is.

It was really pleasant chatting with Mad. Before I know it, we already reached our destination and said our goodbyes.

When I had breakfast this morning, the guy manning the counter asked me outright where I’m from. I told him Philippines. Then he said that he has a friend from the Philippines who worked in the coffee shop for 2 years but later on went back home. He was very friendly.

While walking the banks of the river, I happened to pass by a guy who was sitting on his bike parked at the roadside. I took photos of the river across him and I heard a faint “Hello, where are you from?”

It was only the two of us there so I turned my head to see him looking at me. I said Philippines and smiled. I resumed taking photos and when I finished, I started walking past him. He then pedalled and followed me. He asked me “Where are you staying?” I asked “Why?” politely. I think he struggled to find the words to say what he wanted to say so I used that cue to wave my hand, acted like I’m busy taking photos and say goodbye to appear not too rude. I was glad he didn’t follow me and was relieved to know that he was no longer there when I got back from that small walkway. His actions rang creepy bells, to be honest. I guess he was just friendly. Still, creepy.

(Update after 3 days) Last night, I dined with my housemates and another tourist our host adopted during our sunset tour. We went to this famous tandoori chicken restaurant near where I’m staying. Because the tandoori and nan was so good, I came back again this evening. There were tables setup on the road outside the restaurant and that’s where I took my seat. I was facing the restaurant and one staff kept looking at me. I didn’t mind the curious eyes at that time and made sure to avoid any eye contact with the person. Before leaving the restaurant, I noticed someone standing behind the parked car before the restaurant. At the back of my mind, I knew it was the guy who kept looking at me. So I walked past him. And then I heard that familiar faint “Hello”.

Should I continue to walk or should I remember my manners?

I did the former. I slowly turned my head and looked at the person. Then I looked back at the streets attempting to continue my walk. Then something registered in my head.

I looked at him again and I remembered.

He was the creepy guy!

The apron was a distraction but that face was hard to forget. I then smiled and said “Hi”. I pointed out that he was the one I saw at the river the other day. Just a confirmation on my end actually. And yes, he confirmed it was him. He even recollected how he was following me and I waved him off. I had to make up an excuse and tell him I was in a hurry that time to catch the sunset. He asked till when I’ll stay in town and I gave him my answer. Asking me if I’d leave morning or night was a puzzle to me. What good will it do him? Will he send me off to the bus terminal? Why is this guy extra friendly? Does he find my deep and dark eye bags attractive? Anyway, I told him I’d leave in the morning to avoid traffic on the way to my next destination. He stopped prodding after that. He was telling me something about going to his hotel, which confused me a bit. He works for the resto yet he owns a hotel? Or did he mean he will go to my hotel? Or was he inviting me to his home? I had no clue what he meant. I had to keep the conversation short and he had to keep it short too. I guess he’d get in trouble if he stayed out too long to chat while on duty. As for me, I’m dreading to see him again in case I decide to go back to this charming town and dine at that resto again. But gosh, their chicken tandoori is so delish!

P.S. I might have to edit this out in the near future in case I decide to blog about that resto. But the creepy guy ain’t that creepy after all. Maybe extra friendly. Creepily feeling-close-friendly. LOL

On my way home, the same thing happened. After getting inside the Grab Car I booked this time, the driver asked me where I’m from. Philippines, I said. And that started another friendly conversation. He said he’d like to go to the Philippines one day and asked if 2,000 ringgit would be enough. I told him it really depends on his hotel choice and where he’ll go. He asked if Cebu is a good place to go. It appears that Cebu is one of the key islands in the Philippines that’s famous in Malaysia and am happy to know that my hometown is popular on this side of the planet.

When I arrived at my hotel, we said goodbyes. And as I stepped out of the car, the counter guy from the coffee shop saw me and smiled. It would be rude not to acknowledge him so I waved my hand and smiled. I hope he doesn’t expect I’d dine there tomorrow again though. I can’t afford eating 19RM breakfast meals daily while I’m here.

Are male Malaysians generally this friendly? Is the standard greeting procedure here to ask where one is from? I don’t mind being asked that question though. I guess when placed in the same shoes back home, it’ll be one of my first questions too. But the thing is, I realized I don’t look Malaysian enough on these random conversations as these strangers ask me outright where I’m from.