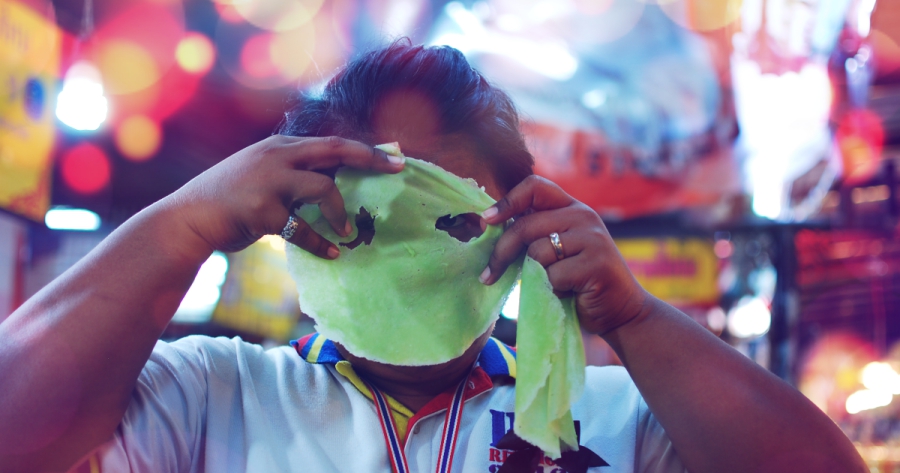 I found Nuddy, our Thai tour guide in Ayuthaya, standing in front of a marble obelisk taking a photo of the structure. Before we started the Ayuthaya tour inside the palace, a mention of these monuments had been brought up so it wasn’t a surprise our feet found our way on this area in the vast lawns of the Bang Pa-In Palace.

As I approached our guide, I sensed that she was unusually quiet. I guess the location calls for it – we were in sacred grounds. Nuddy started sharing the story of the shrine’s symbolism when we caught up with her.

Those without tour guides who chance upon this side of the palace will see a board saying the following:

H.M. Queen Sunanda Kumariratana was a first queen of H.M. King Chulalongkorn. Their Majesties had one daughter. Her name is H.R.H. Princess Karnaborn Bejraratana.

H.M. Queen Sunanda Kumariratana passed away together with her daughter on May 31, 1880 because of the boat sinking accident at Bang Phood Sub-distrcit, Pak Kred District, Nonthanaburi Province.

H.M. King Chulalongkorn was deeply grieved heart for the death of H.M. Queen Sunanda Kumariratana and H.R.H. Princess Karnaborn Bejraratana. A year later, the king commissioned the royal cremation ceremony on March 16, 1881. H.M. King Chulalongkorn graciously ordered the construction of a marble triangular monument. At two sides of the monument was inscribed epitaph in Thai and English and located at Bang Pa-In Palace.

To the uninformed, there’s actually more than what’s written on those board. So with our tour guide around, we discovered a tragic event took place in this country eons ago.

The shrine was actually built in honour of the queen and her daughter who died when their boat going back to the palace capsized. In the past, it was forbidden to touch any member of the Thai royal family. So with that law in place, no one dared to save the pregnant queen and her child.

After wandering around the first shrine, I found Nuddy standing on Queen Sunanda’s memorial somewhat lost in her prayers. I slowly walked towards her, careful not to interrupt her in her thoughts. When she saw us approaching, she started telling us the history of this shrine. We were looking at Thai writings inscribed on the marble epitaph and Nuddy obliged to translate what the writings meant. With the recent death of their beloved King and the message written on the shrine, we can see that Nuddy was fighting hard to avoid being emotional. But I guess no matter how one portrays to be happy and strong, moments like these can’t be helped.

And slowly, we saw tears flowing Nuddy’s eyes. She was fighting hard not to break down and we could see her wiping her tears away. This was all happening as she was translating the writings on the epitaph.

I wanted to hug her at that instant.

But I dared not to.

So without saying a word, I silently walked away as my eyes were starting to fill too.

Having a tour guide for our Ayuthaya trip made exploring the ancient city wonderful all thanks to Voyagin for helping us make this possible.