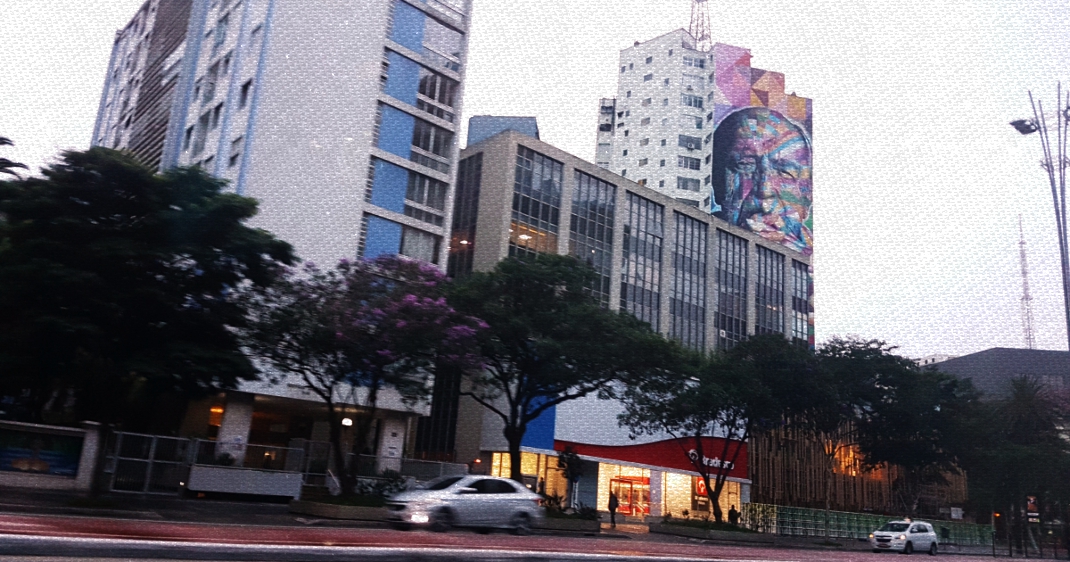 The moment we stepped out of the Sao Paulo – Guarulhos International Airport, the cold weather slapped our faces. It was not below-zero-degrees-freezing cold but it was cold nonetheless.

We had to wait an hour for our bus ride so we hang out at the open bus stop and embraced that cold April night. We were supposed to ride the public bus but we passed by the airport service bus, which brings passengers to different points in the city, and decided to ride with them instead. I guess we were too exhausted from the trip to commute so we opted the special bus. Our new friend, the solo backpacker dude J joined us. He had to take a different route since he booked a stay somewhere else. He later on regretted riding the special bus because he too was stingy and originally planned to take the public bus. I guess the airport service bus made him go over his transpo budget.

While waiting, around 2-3 women approached us and talked to us in Portuguese. They were pushing an airport trolley with full luggage. None of us speak Portuguese. The women doesn’t speak English too so we were trying to half guess each other’s sentences. Mostly we’d say “no portuges, no portuges” to tell them we don’t speak any Portuguese. It turns out they were food vendors who want to sell us packed food and hot drinks. It’s sosy (class/social) to see that kind of food cart. Quite ingenious, I’d say.

Our friend J’s bus arrived earlier and a few minutes after, our bus came. We left the airport at exactly 2110H.

It took around 40 minutes for us to reach our home in Sao Paulo. We made reservations with Hotel Ibis in Avenida Paulista. It was a nice hotel and the location was perfect. The lobby looked fun and colorful. It was past 10pm when we finally got settled. Since we were starving, we decided to go out to hunt the area for a place to eat. We could feel the drop in the temperature when we stepped out of the hotel. It was a struggle to go out as we were shivering in the cold but we needed to find a place to eat.

The wonderful thing about staying at Avenida Paulista is this is considered as one of the business districts of Sao Paulo. The long stretch of road is covered with buildings and the streets are wide too. There were still a couple of fast-food chains open and we went with McDonalds.

McDonald’s in Sao Paulo is quite different from the one we got used to back home. It’s quite spacious. There were less folks around that time. We could also see huge difference in terms of the prices for each meal.

I clearly underestimated this country. Hello, Japan, is this you? 😆

Another struggle we came across was the order taking itself. I would have wanted to order just the regular burger, no drinks and fries included but it was too difficult to communicate with the crew. It was kind of tiring to talk to them and I was already hungry so I pointed to the thing I found on the menu board to get it over and done with.

Once we’re done eating, we went back to our hotel as we still needed to rest for our early flight the next day. It was decided that we’d explore Sao Paulo on our last days in South America before we flew back home.

We could have stayed at the airport to catch a connecting flight to our next city target but after 27 hours of being airborne, we definitely needed a decent place to get cleaned up and rest our backs and the Ibis Hotel was the perfect place to give us the comfort we need, even for just a short time.

I think I only slept for like 2 hours before the alarm woke me up. They say that traffic is terrible in Sao Paulo so we needed to wake up early to make it to the airport on time. We are catching an 830am flight to Rio de Janeiro via LATAM Airlines at Sao Paulo’s second airport, the Sao Paulo Congonhas Airport.

Since it was too early for bus rides, we booked our ride with Uber. Yes. Uber is really, really useful in Brazil. Using the hotel’s free wifi, M set the UBER payment to cash and booked one.

Our driver arrived a few minutes after. It was a fancy car. But the car wasn’t that big though. Most of the cars we hired with UBER doesn’t have trunks. Some have smaller trunks and two pieces of giant luggage won’t fit at the same time. We end up sitting next to our luggage on some occasions.

Once we reached the airport, we looked for the check in counter to deposit our luggage. The Sao Paulo Congonhas Airport is huge.

Once done with the check in, I looked for something to eat since I was getting hungry. The prices of the food items almost gave my wallet a heart attack.

I guess this is what happens when you don’t do your research. I had no clue how Brazil’s food costs so my eyes went wild as I saw that a small empanada-like pastry costs around P80.00 (R$8/$2), some even more. M didn’t finish his burger the night before and was content with munching on that for breakfast. I decided to settle for a small bread at one of the pastry shops as well as the take away crackers we got from Ethiopian Airlines.

Once done feeding our tummies, we went to our final gate to await boarding.

The gate assigned to us was in chaos. It looked like we were at a bus terminal and not at an airport. There were too many people. With this gate, passengers are asked to ride an airport bus to bring them to their aircraft.

A huge board showed the flight schedule for that hour. We couldn’t find ours. We carefully waited. Looked back at the board. Then there it was. Our flight. Saying a different gate number from where we were. So off we we went and ran to the escalator hoping we don’t get left behind.

The running wasn’t necessary though. We didn’t have problems finding our new gate. The good thing was our boarding gate was transferred at the second level. It’s more peaceful on this area of the building.

A few minutes later, we were called to board the plane. No need to ride a bus. We’re walking straight to the jet bridge and into the aircraft. Sweet.

I think we were the only Asians on board that plane. The rest of the passengers were Brazilians. White skinned. Brown skinned. Dark hair. Blond hair. They were taller too.

We were seated on the back part of the plane. I think it was because this was the only window seat row available. The 2 rows of passengers in front of us were like travelling as a family. They knew each other. And they were all talking nonchalantly. It was like we stepped right into a scene from a Spanish soap opera, except that they were speaking in Portuguese. Hearing them speak was like watching a telenovela episode.

The flight was good for an hour and I was looking forward to seeing what would be LATAM’s in-flight meal. I assume too much, you see.

A thousand moments later, the sound of the flight crew announcing our arrival woke me up.

I slept on the entire flight! I would have wanted to see what Rio looks like up in the air. But I missed that too. Darn!

I asked M if we got served food but M fell asleep too. I guess we were that tired that we were dead to the world even before our flight took off.

As for the in-flight meal, we’ll never know. I only saw empty plastic cups on people’s seats. I’ll assume once more that perhaps the airline only served water on that one hour flight. Bitter me.