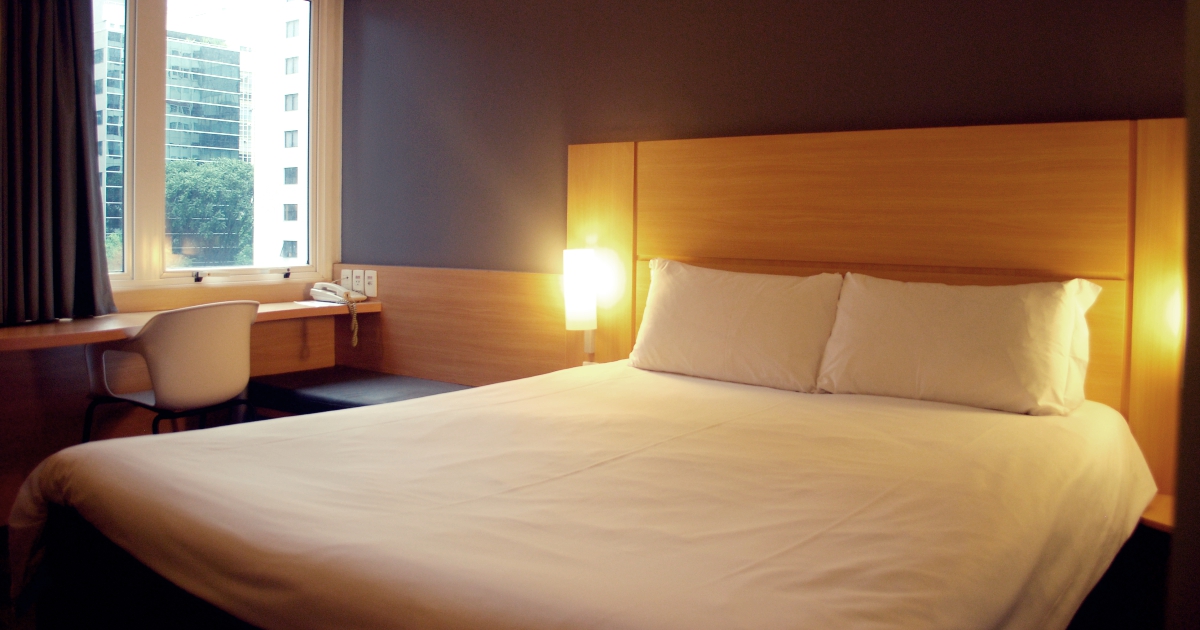 Looking for a safe and nice hotel in Sao Paulo, Brazil can be challenging. With different hotels to choose from, one might find it hard to decide which hotel to book when visiting São Paulo. The great thing is we didn’t have to look hard once we discovered the Ibis hotel chains in the area. There are a couple of them spread-out in the city but we chose the one that’s closest to the city center, the Ibis São Paulo Paulista Hotel.

When we landed at the São Paulo – Guarulhos International Airport, our initial plan was to ride a public bus to get to our hotel. But searching for the bus stop led us to the Airport Bus Service where by paying a certain fee, we were dropped off just a few steps from the hotel building, which was very convenient for us if I may say so.

Hotel Ibis Sao Paulo Paulista is conveniently located in the heart of São Paulo. The hotel is nestled between the high rise buildings of Avenida Paulista, one of the city’s famous business districts. The hotel’s location is perfect as it is close to the Consolação metro station.

Avenida Paulista is the best place to be when visiting Sao Paulo. There are a handful of shopping malls here. Restaurants, food courts, and pubs abound too. If you’re into history and arts, cultural centers are nearby such as the Museu de Arte de São Paulo or the MASP Museum.  The Parque Tenente Siqueira Campos, commonly called Trianon Park is 12 minutes away on foot.

Upon entering the hotel lobby, I couldn’t stop myself from grinning. A splash of color greets you and their playful interiors somewhat give you the assurance of a wonderful stay in their property.

Checking inn was smooth and hassle-free. The receptionists of Ibis speak English well so we didn’t have to struggle one bit when communicating with them. You see, majority of Brazilians doesn’t speak English. Portuguese is their first language. When you open the television, it would be difficult to find an English program or show since Portuguese is what’s used by the television networks. It’s a good thing that the hotel has cable TV. The hotel’s front desk functions 24/7 and they’re a phone call away in case you need any help too.

The rooms at Hotel Ibis Sao Paulo Paulista have a minimalist design. They only have one room type, a double room with a double bed.

Each room has a minibar, a telephone, flat-screen TV, electronic safe and comes with an ensuite bathroom.

Towels, basic toiletries and a hairdryer are provided. Extra blankets, which comes in handy during the winter months, is available and stowed on the upper section of the room’s open wardrobe shelf. WiFi is available throughout the property.

The Ibis Kitchen Lounge offers meals for breakfast, lunch and dinner. The hotel charges extra for their sumptuous breakfast buffet.

They start serving food at 630am. For those who can’t make it in time for breakfast, a simple breakfast spread in the hotel lobby is offered for a minimal fee.

Ibis Budget Hotel’s breakfast includes different varieties of bread. Cold cuts and cheese are staples. At one section of the restaurant, omelette makers can be found and you can request how you prefer to have your breakfast eggs.

The only downside here is that you might struggle communicating with the cooks since they are not adept in understanding English so a little patience is needed. I requested for a sunny side up egg and got what I requested after a few silly confused discussions with the cook and after watching over how it’s done to prevent being served a hard boiled egg.

Another guest wanted half of the omelette the cook was making and I had to tell him someone else owns that omelette and that he has to request for a new one. Trouble is, the cook couldn’t understand the guest’s request.

Cakes, other pastries and different fruit juices are among your choices when you have your café da manhã or breakfast at the Ibis Kitchen.

Pão de queijo or their famous Brazilian cheese bread is also a mainstay in their buffet spread. My favorite’s their small chocolate croissants. It’s so yummy especially when still hot. I could still remember how the flaky pastry broke into my mouth everytime I chew it. That and the mixture of tiny chocolates create a delightful taste you simply want to eat more.

We stayed and checked in on 3 separate occasions at the Ibis São Paulo Paulista Hotel. The first night was when we arrived from our long haul flight from the Philippines. The second was after a long bus ride from Paraty, a small town in Rio de Janeiro. And the last was when we came back from Foz do Iguazu before our flight back home. On these instances, we deemed it best to book our stay at the Hotel Ibis São Paulo Paulista since we really liked the hotel. Its location was a bonus. It was so convenient. Our stay at this Ibis hotel was very comfortable and we felt safe all throughout our time here.

Here are more photos of the hotel during our stay.