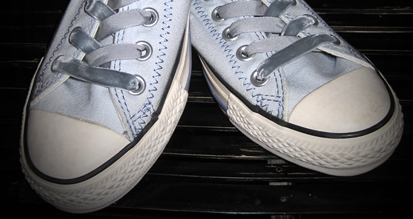 I’m the tsinelas, sandals, opened toed open heeled, strappy shoeseseses type of gal. Never been too comfy wearing closed shoes but I thought that it’s also high time I invest on a pair of travelling shoes just in case the need arises in the future.

So when I learned that Converse will hold its yearly Mega Sale at SM City, I got excited to check the place out even though it meant waking up early just to storm SM as their doors open to the public. That was the plan. But I woke up late and got there past 12nn. When I arrived there, the place was packed. The lines were too long and I got discouraged to look for anything. Adding the fact that most of the prices were beyond the budget I set, I immediately got disinterested and just observed the ongoing sale craze.

shoes were arranged according to design and sizes

Praline, trying on 2 pairs of shoes that caught her eye, she bought this one

As I was walking past the very crowded trade hall, I saw this counter and approached it to look for the display there. Then for an unexplainable reason, I tried to squeeze in the small passage way where people where lining up to pay their items so that I can ee the other side of the counter.

And there it was. Sitting on top of the wooden table. It’s as if it was waiting for me all those time. I saw the faded denim blue chucks and immediately took it, held it in my hands and observed its simplicity. The moment I flipped the price tag and saw how much it cost, I immediately knew I found what I came there for.

Realizing that this pair of chucks is just right on my budget, I no longer hesitated and knew I will be buying this cute little thingy. I no longer cared how long the line to the payment counters were. I just knew I had to buy this pair of Converse All Star.

I’m the tsinelas, sandals, opened toed open heeled, strappy shoeseseses type of gal. But this one I’ll make an exemption.

I hear that Converse trainers are particularly popular in Germany. One day I might take a trip and do some shopping for different styles that I can’t get here. Although with the currency difference and exchange rate, I would probably need some kind of German financial translation.

9 Things Not To Miss When in Hong Kong