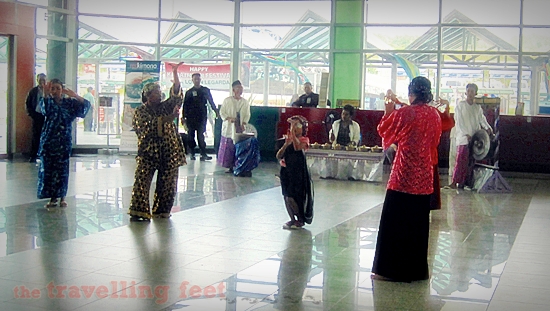 The month of August is very important to Davaoeños for this is the month where they celebrate the weeklong Kadayawan sa Dabaw Festival.

The Kadayawan Festival is an annual festival in the city of Davao in the Philippines. Its name derives from the friendly greeting “Madayaw”, from the Dabawenyo word “dayaw”, meaning good, valuable, superior or beautiful. The festival is a celebration of life, a thanksgiving for the gifts of nature, the wealth of culture, the bounties of harvest and serenity of living.

I’m not really into festivals but when Eric of Byahilo.com asked me a year ago to join him and a couple of friends to attend the 2011 Kadayawan Festival of Davao City, I didn’t hesitate to book for the trip since Cebu Pacific was offering promo fares at that time. I booked for a RT Cebu to Gen. San. route (P183.36/one way all-in) as suggested but after thinking about the hassle+costs of travelling from Gen. San. to Davao, I immediately booked another trip, this time with Philippine Airlines when they released promo fares last February. I only paid P116.00 all in for the one way trip from Cebu to Davao. Not bad right? 😉

So after I almost missed my flight to Davao, the next thing I knew, I was already up in the air and I could hear the pilot announce that we’d be landing in a short while. I must have dozed off for I failed to check out Davao’s aerial view and that to me was such a bummer 🙁

When I went to the arrival lobby of the Davao airport, we were greeted with a performance of a certain tribal dance. Refreshments were also served by the airport management as a gesture of welcome to its guests in this very festive mood in the Durian Capital of the Philippines.

This was my first trip to Mindanao, the largest island that comprises the Philippine archipelago. I only have very little information about the things that awaits me on my solo trip to Davao. Actually, when I hear of Mindanao, I normally associate it with “trouble” or the phrase “scary” or “not safe”. And when I hear the word Davao, all I could think of is the Philippine Eagle, also known as the Monkey-eating Eagle, the country’s national bird. Then there’s also Mount Apo, the highest volcano in the country and famous for being the Grandfather of Philippine Mountains.

This was my first solo trip and I didn’t create any itinerary for this 5-day trip to Davao. To make matters worse, I didn’t have any hotel reservations and I didn’t read enough information to acquaint me what to expect the moment the aircraft of Airphil Express landed on the runways of Davao City.

Without knowing where to go, I stepped out of the airport doors and tried to scan the surroundings. “Hmmm…Where should I go?“ was what I asked myself. Then I asked a lady giving away real estate flyers on where I can hail a metered cab. They pointed to a man standing next to me and when I asked how much is the regular rate, they said it’s 40 pesos. I said no to the offer thinking that I can find something cheaper. Later on, I learned that the taxi rates really start at P40 even if they were airport taxis. So when I asked where I should head off to find a jeepney, a girl turned to me and told me she can show me since she’s heading towards that direction. She asked me to tag along. I thought she was also one of the passengers from my flight. I then learned that she was bound to Cebu for a vacation but arrived late in the airport. She re-booked her flight that afternoon and since she doesn’t want to stay in the airport, she went back to the city. She offered to be my tour guide on that brief time and I was really thankful for her hospitality. She also offered to help me find a place to stay.

That welcoming gesture alone made me say “WOW! This must be my lucky day!” I was super happy when I bumbed into Joanne, a total stranger who never had second thoughts of helping me out in my moment of distress.

The blurry image of Davao in my head was becoming clearer as each hour passed. Hospitable and Helpful people, check! 😉

Actually, Joanne is from GenSan but she also knows Davao by heart. As we rode a jeepney to the city proper, I then saw a few glimpse of Davao. One thing I could say about the place is that it’s like a super huge downtown area. After 2 hotel inspections, I decided to stay at the Sampaguita Inn which was strongly recommended by Joanne. It was also the perfect location for our rendezvous point, which is the Apo View Hotel as it was just a walking distance from the inn.

My room was going to be available at 3pm and it was still 11am. We decided to take our lunch instead. When my new found-friend asked me where I want to eat, I told her I want to try eating an authentic Davao dish that’s just cheap. You know what she suggested? hehehe “Have you already eaten a carabao’s meat?“

By the way, there were originally four of us who booked flights to fly to Davao but all of them backed out. I’m glad that I still pushed through with this trip for I would say that this was one of my most unforgettable trips. Hahahaha. Typing the word “unforgettable” made my left eye shed a tear. Ok, I need to stop being mushy now 😆 Really, this trip to Davao made me realize a lot of things. For one, it allowed me to see Davao in a different perspective. I think I’ve found a second home in Davao (wipes away tears now, hahaha…no kidding…). I think it has something to do with its warm people and I am really thankful for knowing the likes of the great Olan Embusacado, the hyper active and kalog Renz, the very accommodating MJ Maranion and Kim Ignacio, the very patient CJ Salas of and the super sweet Marcus Castle. Special thanks too to Ria and Andrew for introducing us to the owner of Lachi’s and letting us taste all their delicious meals and super yummy cakes! I still can’t forget about that Durian Cheesecake! Another thanks to Andrew for the meat bun, siopao and were those tarts? which was equally yummy courtesy of Mam Beb’s Bakeshop. And of course, Grab-a-Crab for the wonderful lunch and those mouthwatering crabs! Then also to Apo View Hotel for continuously providing each tourists in Davao the chance to experience the rich culture of Davao. And lastly, to Joanne, someone I never expected to meet in a place where no one knew me. Thank you for your kindness as you helped me adjust and get to know Davao.

One thing’s for sure…Davao, I shall return!